Today, Matthew had his hair cut at a barber shop for the first time! (A branch member offered to pay for them to go. Were they looking shaggy?) In Spring, one of the ward members (a professional stylist) cut the missionaries hair, and he's cut his own hair a couple of times since.

P-day is on Tuesday this week! Because President's Day is on Monday, P-day was moved to Tuesday so that we could be out and about when more people were home for the holiday. Or maybe President Larkin just wanted to enjoy his day.

On Tuesday, we went and did some service. We pressure washed an RV trailer that had been sitting around for a few years. The front of that thing was pretty nasty.

On Thursday, we had a lesson with the Castillo family, the people who we did service for on Tuesday. 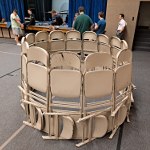 Short email this week; more pictures of things he saw than story. A lot of what he wrote was about transfer day:

Shattering last week's record w/ 3,249 words (I'm pretty sure that that's more than anyone heard from him during the previous 20 years), Matthew shared many details of his week, the highs and the lows.

Matthew proudly told his sister that he now holds the record for the longest family letter (pasting the body into LibreOffice shows 2,565 words)

Matthew's now sending most of his letters to a family mailing list, so more people are getting all of the details there, and I expect that fewer -- mostly non-family -- will be looking here. As a result, these entries may become shorter on average. Or not.

There's little to recommend the town of Fred, but the elders there do have one of the nicest homes a missionary could hope for -- or did.

This week was exhausting for some reason, and Elder Beyeler and I were both more than ready for P-day to come.

Rss feed of the articles