Matthew told us about a game they played on P-day called "Love your Neighbor" that's a much more interesting version of "musical chairs". He was also involved in a minor traffic accident:

Matthew wrote on a day where I awoke at 4AM to a power outage and had to trudge through deep snow(!) to switch the house over to battery. By noon we had 14" on the ground. He, on the other hand, woke up to 70 degrees -- soon raised to upper 70's & rain -- and isn't anxious for summer!

Friday was April Fool's Day. I got up a few minutes early, and waited for President Ross to come in. Normally, he comes in at 6 am, sings to us to wake us up, then we go on a short walk with him. This time, in observation of the holiday, I screamed to scare him when he came in. The result was far better than I imagined. He screamed and jumped, then we were hanging onto each other, trying not to fall over from laughing so hard. 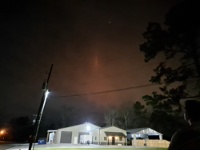 Matthew went on splits in Orange, and got to spend Monday on a bike!

Matthew said that last P-Day they had "a workout like no one has ever seen before", courtesy of one of the missionaries who used to be a personal trainer.

Today, Matthew had his hair cut at a barber shop for the first time! (A branch member offered to pay for them to go. Were they looking shaggy?) In Spring, one of the ward members (a professional stylist) cut the missionaries hair, and he's cut his own hair a couple of times since.

P-day is on Tuesday this week! Because President's Day is on Monday, P-day was moved to Tuesday so that we could be out and about when more people were home for the holiday. Or maybe President Larkin just wanted to enjoy his day.

Rss feed of the articles