Matthew said that last P-Day they had "a workout like no one has ever seen before", courtesy of one of the missionaries who used to be a personal trainer.

They followed the brutal workout w/ an afternoon of volleyball and chair soccer, then, when time to go, they ran around frantically trying to find their keys that somehow made their way into the DL's pocket. (They were only 10 minutes late to dinner.) The next day, his companion awoke feeling sick from the intense activity of the day before, so spent the morning in bed.

Thursday & Friday they played more volleyball and chair soccer w/ the YSAs. "They" included a 3rd elder who's working with them for a few days while his companion recovers from a gall bladder removal.

Last night, instead of sleeping peacefully, they got more exercise:

Sunday night was an experience. It was a dark and stormy night. Just kidding. It was just dark. It was a few minutes before midnight, and Elder McAffee and I were trying to get to sleep. Suddenly, the outlet about six inches from my companion's head exploded. It sounded kind of like when the oven element exploded. I jumped up, sprinted across the room (about four feet), yanked his bedding away from the fire, and proceeded to blow the fire out. It tripped the circuit breaker, but it still caught something on fire, not exactly sure what it was though. Might have been the outlet cover, or maybe the paper on the sheetrock. I'm thankful that it didn't start any fire inside the wall. If it had, I probably would have grabbed the fire extinguisher along with the hammer that was in my companion's desk, and knock out whatever section of wall I needed to, to get to wherever the fire was.
There was a heater plugged into that outlet, but it wasn't on. Anyway, the plug of the heater is melted into oblivion.
Elder McAffee wanted to sleep in the main house, so we did that. 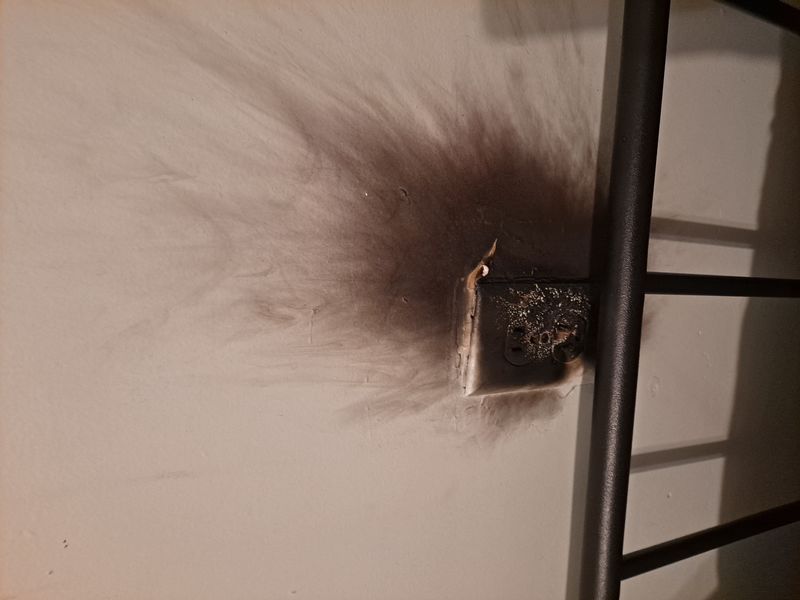