Last Tuesday, Matthew spent the day hanging out in Beaumont -- at the chapel with other missionaries, and at the mall trying to figure out why his companion wanted to walk around a mall ("I have never done something so boring in a long time. Even walking the same streets several days in a row is less boring.") -- waiting for transfers to complete.  He didn't finally get to his new area until 5:30 PM.

This should be an interesting area! Looking at his new place on the map, I asked if the house was owned by ward members. (Dumb question, since I know he lives outside of his ward.) It's even better:

I live on the Ross Compound. Brother Ross is the 1st counselor in the mission presidency.

The "compound" consists of the main (newer, larger) house, where Bro. Ross & family live, "the Shanty", an old house built in 1950 that Matthew & his comp live in, another house where two more sets of missionaries live (I assume one set for each of the 3 Williamson wards) and smaller outbuildings.

Monday through Friday, President Ross comes into our apartment at 6:00 singing his heart out, then we go for a walk. On Saturdays, instead of going on a walk, we go down to Donut Palace and get donuts.

Few missionaries have a mission presidency member so involved in their everyday lives!  Might be a bit weird at first, but it's fantastic that he's able to host all of the missionaries, and keep an eye on them. Uh oh, do I detect rebelion here?

Because President Ross doesn't come in and wake us up on Sundays, we were able to sleep in a little bit. 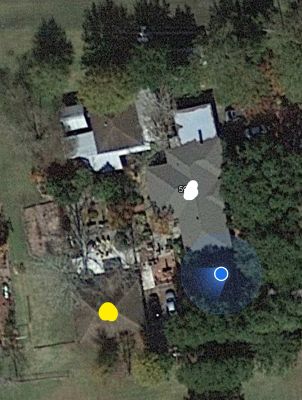