He shared a conversation that they had Monday evening with a woman they hadn't been able to contact in a while:

It was about 6:45, and mostly dark. We knocked on the door, and the resulting conversation went something like this:
Mel (from behind the door): Who is it?
Us: It's the missionaries.
Mel: Who?
Us: The missionaries!
Mel: What kind of missionaries?
Us: From the Church of Jesus Christ of Latter-day Saints.
Mel: I don't know who you are! Why are you coming by so late after dark? Do you really think that I would let you open my door? I have a .45-caliber right here, and you want to come in?
*At this point, she continued yelling at us, but we decided to turn around and leave*
*When we got back to the truck, she opened the door and yelled something like this:*
Mel: Don't ever knock on my door again after dark! I'm Baptist! But have a good day!
It's pretty typical of people down here to be irritated at us for knocking on their door, say they're Baptist, but then tell us to have a good day.

Wednesday was a hasty mission apartment inspection followed by an all-afternoon trip to assist with a baptism. 6 elders lowered a 300-lb. quadraplegic man into the bishop's swimming pool to perform the ordinance -- after the transport van broke down a block away and had to be towed in. Finished everything and poured him into the front seat of a pickup to take him home.  It was a lot of work, but he was one happy man! 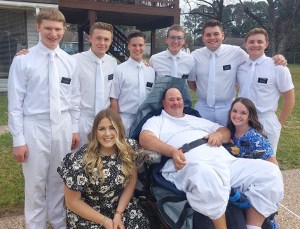 Thursday they drove to a church building for training and were pulled over -- just as they were slowing down to turn into the driveway -- for speeding in a consturction zone. He said the officer was very friendly and let them off with a warning.

Monday he got to eat rattlesnake for dinner. A chunk of the day was occupied with packing and saying goodbye to people, because...

Today he transfers to the Williamson 3rd Ward in Vidor.

Why Williamson, not Vidor, one wonders, when there's nothing "Williamson" visible on the map? As it turns out, about 7 miles north of the town, is a small settlement where Williamson established a homestead and grew his family long before the lumber company came and established the beginning of a town. They joined the church in 1900, and their clan has populated the area since. 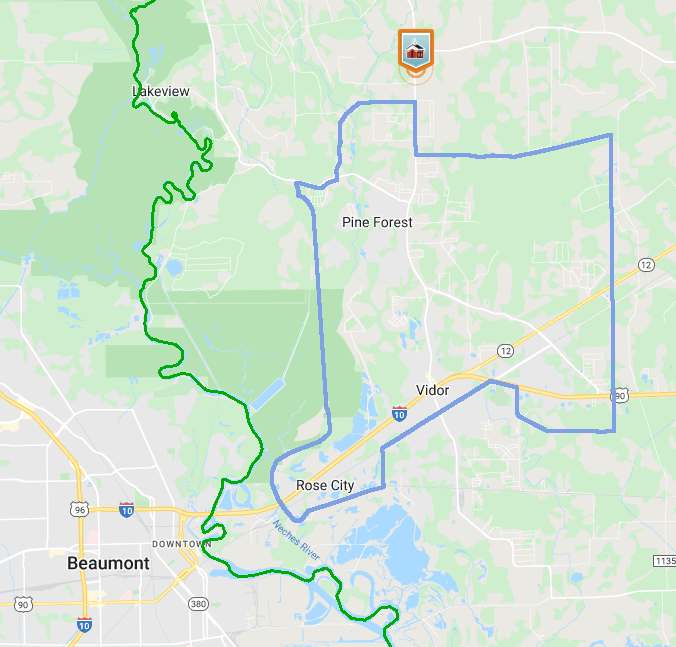 Oh, and Wasps grow to be about 2" long there.