Shattering last week's record w/ 3,249 words (I'm pretty sure that that's more than anyone heard from him during the previous 20 years), Matthew shared many details of his week, the highs and the lows.

He spent more time in the apt. than planned this week.

The good news is that they had a lot of teaching appointments.  The bad news is that most of them -- and their back-up visits -- fell through.

The good news is that he got his keyboard, so he could practice music!  The bad news is that the minimum volume is still loud, their walls are thin, and he's somewhat afraid that the neighbor will complain.

The good news is that he had plenty of opportunity to exercise his cullinary skills.  The bad news is...actually, there wasn't any. He worked around missing ingredients and provided himself and his companion w/ tasty eats.

His sleeping skills, on the other hand, need some work:

I didn’t sleep all that well last night because I kept almost falling off the bed. Okay, here is the full bed story. When I was in Spring, I was in the middle bed of three. I was constantly waking up in the night because I was almost falling off the bed. In my second transfer (still in Spring), I recognized what was happening (your brain doesn’t work very well when you are half asleep), and switched bed locations with Elder Shaw. Now, I was up against the wall, and I slept much better. In our apartment in Woodville, there is no carpet anywhere. So, several nights ago, when I squished up against the wall (that is surprisingly comfortable, by the way), the bed zhooped away from the wall, and down I went between my bed and the wall, landing on my luggage / the floor. That wasn’t the most pleasant way to wake up at 2:30 am. Obviously my body thought it had to try a different way of waking up. So, a couple nights later, I woke up because I fell off the other side of the bed. This time, I just fell straight onto the floor; there was nothing in the way. I'm not sure that my future wife will want to share a bed with me...

Cold weather (Ooh, it got down to 25 one night!) prompted apt mgt to post flyers requiring anti-pipe-freezing measures.

Two great self-referrals -- one with the aid of a latter-day saint credit counselor who she spoke to over the phone, the other someone who they met in December that flaked on them, but showed up this week walking along the road -- provided a boost to get the elders through the more disappointing parts of the week.

This week's transfers, and Matthew's exchanging his companion of two months for another one who's been out the same amount of time. 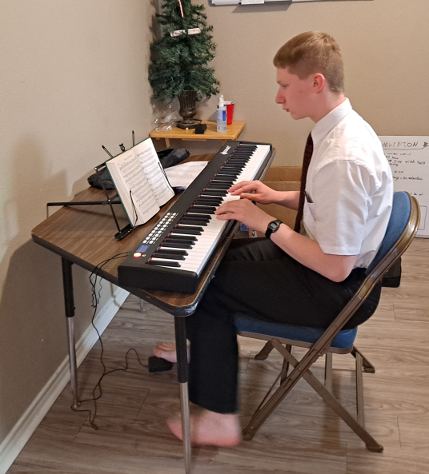