He's really liking his new area; the rural environment agrees with him more than the city.

Sending packages is sometimes a challenge. Michele ordered a pair of shoes for him, and in spite of her best efforts to encode his name, etc. on it, the package arrived at the mission home w/ barcodes (referencing the courier's internal tracking) and cryptic pieces of the address, and no other identifying info -- apparently the vendor/carrier thinks that as long as the driver can deliver it to the address, that's good enough! So the package was open, pictures taken and passed around the mission with "Are these yours?"

A few other tidbits:

This week, one of the members paid for our lunch at The Pickett House. Since they weren't able to make it, they just paid ahead. One of the things that we got was a bowl with a few whole jalapeño peppers in it. Elder Beyeler had one, I had two. Since I am in Texas now, I am trying to acclimate myself to a little more spice. But after eating those, our eyes were watering pretty good, and we both had to blow our noses several times. Plus the normal feeling of your mouth being in a lot of pain.
...

Also on Saturday, we organized a small group of people together and sang Christmas Carols at the assisted living home. I played the piano, and Elder Beyeler and everyone else sang.
This week contained two milestones for me. Sunday was the first time that I got sick on the mission. I woke up with a fever, headache, and was nauseous. So the two of us didn't go to church. Aparently this bug is going around the mission.
Today (Monday) marks three months of being in Texas. It doesn't seem like it's been that long, while at the same time, it feels like it's been a lot longer than that.

Michele sent Mr. "Eagle Eye" a photo album, which he hasn't yet opened. He wrote:

...one of the winter weather advisories for the Oregon coast range. As I was skimming over it, I noticed a typo in it. Speaking of, will there be typos in the photo book because I wasn't there to proof-read it?

Answer: Surely! We miss him in many practical ways, besides just enjoying his presence. It's a joy to hear of his adventures in the field, though. 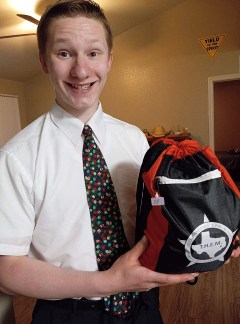