Monday was the first day in a couple weeks that I could really span an octive on the piano! So I spent a while playing the piano. I've been playing ever since the day of my surgery, but hymns are a lot easier whenever I can span an octive with my left hand. I also jumped off the stage (yes, same stage) and was able to reach around and up and touch the basketball rim in mid-air. No, I did not try grabbing on.

The next day he got his stiches removed and his cast replaced by a brace. That evening 6 missionaries had homemade hamburgers at a member's home, and 3 of them suffered from food poisoning. Matthew never vomited, but 5 days later(!) was still having problems w/ stomach pain and diarrhea.

Thursday Matthew spent nearly an hour at the church trying to get copies of his X-rays (given to him on a DVD in a proprietary format requiring special software to view) converted to a normal image format. He finally took screenshots. The result was still much better than what the hospital originally suggested: taking photographs of their monitor w/ his phone.

He ended w/ a Matthew tease:

Friday, we had interviews with President Larkin in Atascocita. After interviews, I stepped off the curb wrong, and twisted my ankle. I got some decent road rash and tore my shirt pretty good when I fell, because I couldn't really catch myself or land well due to my broken wrist.

Okay, I'll confess. The last two sentences were entirely made up. We did have interviews, but I did not sprain my ankle.

Actually, if I were to sprain my ankle right now, I would be in a bit of a pickled predicament. If I sprained my left ankle, I couldn't use crutches because of my broken wrist. I couldn't use a wheelchair because we live on the third floor of our apartment complex. If I sprained my right ankle, I could use a crutch on that side, but we couldn't drive anywhere (my companion doesn't have a driver's licence). 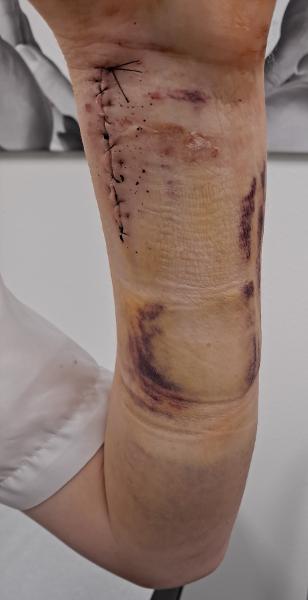