Your friendly editor is on vacation in UT w/ Ariana (it's her "Daddy Trip"), so I'm going to be pretty lazy on editing.

This week got more interesting as it progressed.

Monday, I spent a while on the computer filling out FAFSA stuff.

Tuesday, both of our lessons fell through (which is more normal than not). We spent an hour and a half talking with this lady named Miss Ridgelle. A couple of her grandkids were over (both toddler age) and apparently normally they do not like strangers; usually they cry and hide whenever someone comes over. But they were both playing happily in the room while we were talking, and by the end of the visit, I *almost* got the younger one to give me a fist bump (the older one was happy to do it though).
Tuesday evening, all the missionaries in our district went with the youth and sang Christmas Carols at a nursing home.

Wednesday, we had three lessons! The first one was with a guy whom I'll call John. John says that his family members talk with and worship Satan, and sometimes he sees Satan while they are doing it. Elder Fisher and I think that he is just schizophrenic. He seems mentally all there, and he seems like he isn't on drugs or anything.
Lesson number two was with someone named Robert. One of my least favorite phrases that I hear as a missionary is "Oh, I grew up Catholic". Out of the many lots great number of people I've heard say that, Robert was the first one that said he was willing to pray about the Book of Mormon. So kudos to him for that!
Number three was with someone who didn't remember filling out several pages of personal information on comeuntochrist.org, but was still willing to meet with us!

Thursday, we tried contacting 27 people. Out of those 27 attempted contacts, two were successful.

Friday was Faith Meets Family. That is where recent converts, along with their respective missionaries, get to go to the temple and do baptisms. I've never served in a ward before where there was an active, recent convert that lived in our area. So this was my first time going! Figuring out rides was a headache and a half, because for some reason, no one that missionaries teach has a car. We finally figured out rides, then a couple of the people who said they could give rides bailed a few hours before they were supposed to do so. We (meaning us four sets of missionaries) called literally every active member in the ward to see if we could find rides. Finally, Bishop decided to go to the temple instead of the primary activity, so he was able to take the remaining people. Everything was all good.
...until...
we learned that "our" new member decided not to go.
Which meant that Elder Fisher and I didn't get to go to the temple.
This new member told Bishop that they weren't going, who told the other Elders, who passed the message along to us. Why didn't they just contact directly? I don't know. So we had to figure out something to do for the rest of the evening, because we were planning on spending it at the temple.
...until...
we had dinner with Brother and Sister Webb. Brother Webb is the fire chief here in Cloverleaf. They just moved into a new fire station a few days previous, so he invited us (along with the other Elders who didn't get to go to the temple) to tour the fire station. Remember when Mike Brown gave us a tour of Bonneville Dam, and how we got a much more in-depth tour than most people got? Same thing here. We toured everything, down to the firefighter's bedrooms and bathrooms, everyone's offices, individual people's salaries, and some of the bills that the fire station had to pay.

Saturday, we talked with Terry. He is / was a profiler, which means that he talkes with someone for a while, then creates a "profile" for them (e.g. their family size, what their parents do for a living, ect.). He guessed that I had six siblings.
That evening, we went to the ward Christmas party. It only took me 23 minutes to get all the way through the line!

Sunday, Elder Fisher and I were the first missionaries at church. We then got a desperate plea for help from from the other Elders. They were on their way to church and got a flat tire, and neither of them knew how to change a tire. So Elder Fisher and I went down and I changed their tire. The most difficult part of it was figuring out how to use the jack that was provided with the Equinox. Once I figured that out, it was a breeze.

The weather has been rather warm this past week, but it is supposed to cool off this next week, along with most everywhere in the US, except for the Southwest and the eastern seaboard.

I'm sending a box home that contains Christmas presents. Inside the big box, there are several smaller, wrapped boxes with people’s names on them. One of those boxes is to me; just set that aside somewhere safe until I get home.

And, just an overview of the next couple of weeks. Today, Monday the 12th, is P-day. Next Monday, the 19th, is P-day. The next Sunday, the 25th, is sort of P-day, but we can call home. That next Wednesday, the 28th, is transfers, which is also P-day. 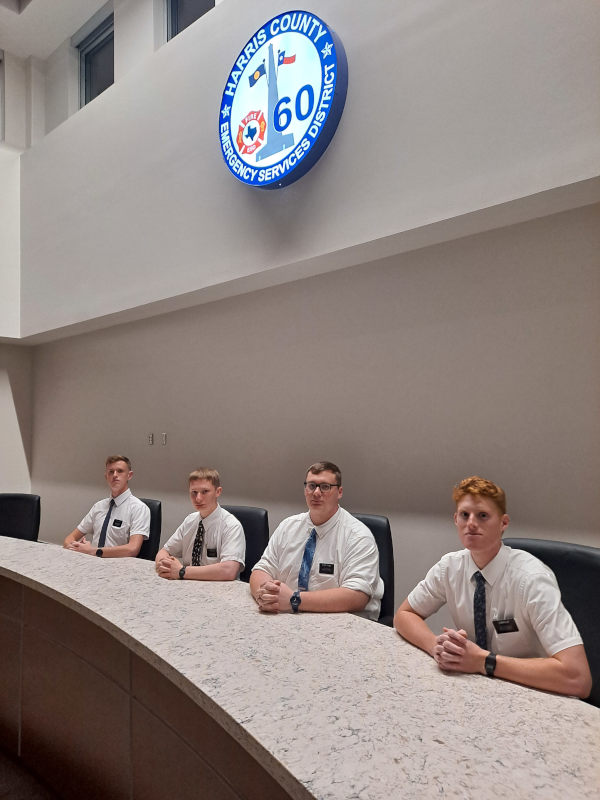